And forgive us our debts, as we also have forgiven our debtors. (Matthew 6:12)

Release any negative, limiting, or self-defeating beliefs buried in your subconscious too. These beliefs may be about life, love, or yourself. Beliefs create reality. (Melody Beattie)

We had some time today between saying good-bye to our son and daughter-in-law, and heading to say hello to my sister and her kids in Burbank for the rest of the week.

We did some more research and found my step-father’s gravesite. So we took the time to find him before heading to the airport.

This pilgrimage was an unexpected, unplanned passage of release.

A whole lifetime of beliefs about myself were wrapped up in this one person. A man who loved and raged. A person, who was a beloved husband and father, and a marine. A human being who was broken and broke hearts.

He died eleven years ago, and I had forgiven him seven times seventy times, but I never released him.

I don’t think it was a coincidence that I remembered him this week. And that we were staying close enough to the cemetery to make this trek of closure.

When I walked up to the etched, marble slab under the stark iron tree, which cast shadows over his name, a great release of sobs poured out. Layers of grief and unbelief shed, like the tears coursing down my cheeks.

I ran my finger across the outline of the cross. That cross engraved above his name somehow erased years of debt.

I didn’t need to blame myself or him anymore for the heartache that brokenness forced upon us.

The potential for redemption was outside of us, not within us, as I had believed for too many years. 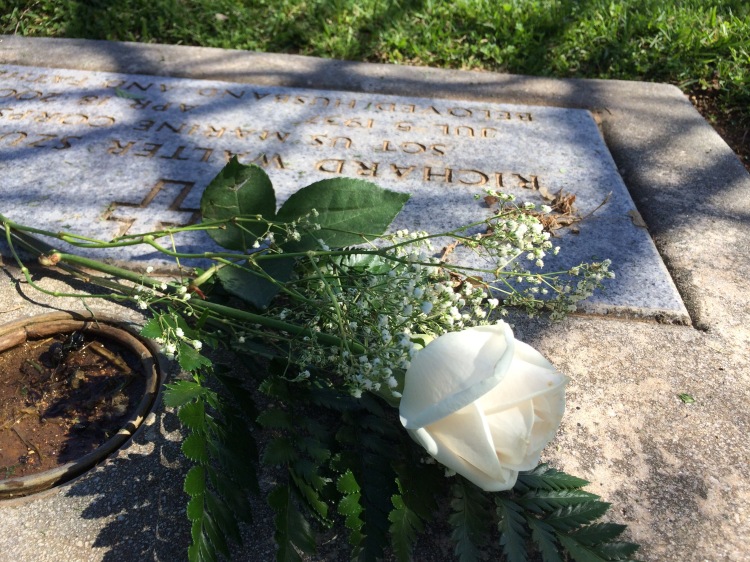